BREXIT PANDEMONIUM: WHAT DO THE PEOPLE THINK?

Across Scotland people have been giving their thoughts and reactions following Theresa May’s historic defeat last night in the Commons over her Brexit deal.

Senior ministers have insisted that Theresa May is committed to reaching out across party lines to build a Brexit consensus following the crushing defeat of her plan for leaving the EU.  Labour, however, claim that she has had two years to do this and has previously been uninterested in cross-party involvement. 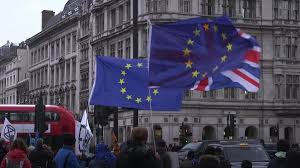 The Prime Minister faces a Commons vote of no confidence having seen her deal with Brussels overwhelmingly rejected by MPs in the House yesterday evening.

While she is expected to survive the latest attack on her government, Labour has warned she is in danger of scuppering efforts to find a new way forward before they have even started.

Rebel Tory MPs, who helped deliver a massive 230 majority against the withdrawal agreement, made clear that they would back the Government in the vote on the no-confidence motion tabled by Corbyn, as did Mrs May’s allies in the DUP.

However, MPs from both the Leave and Remain wings of the party warned that she would have to accept major changes to her Brexit plan if she was to stand any chance of winning the backing of Parliament.

May’s deal was rejected by British MPs with 432 members voting against it and 202 approving it, making it one of the worst political defeats in parliamentary history.

While the UK government now has three working days to map out a new plan of action, Britains have been voicing their opinions on the Prime Minister’s lost vote as well as discussing where the country goes from here.

Scotland’s first minister, Nicola Sturgeon, has said: “The Scottish Government will be “intensifying” its calls for a second European referendum in the wake of the Commons Brexit vote.”

The SNP leader said Mrs May had “clearly failed to bring the country together” in support of her proposed deal, and she demanded the Prime Minister must now “change course” and “genuinely involve” all regions of the UK in Brexit plans.

However Conservatives and Unionists have accused Ms Sturgeon of using the Westminster vote defeat to push for a second independence referendum. The First Minister took to social media to voice her opinion, she tweeted: “It is becoming increasingly clear that Scotland’s wider interests will only be protected with independence.”

With the vote quickly approaching, emotions and tensions are high with this being the biggest constitutional change the country has faced in decades.  The no confidence motion will be voted upon around 7pm this evening.