Children in Scotland are consuming around 4.4 million soft drinks per week, an average 60,000 a day according to new figures published today by Cancer Research UK. This comes despite the introduction of the sugar tax earlier this year.

The numbers were calculated using data from the 2015-2017 Scottish Health Survey. By applying the frequency of which they were consumed to the number of children aged between 2 & 15 they estimated that youngsters across the country drank 627,288 soft drinks a day – amounting to 4,391,015 a week.

Supermarkets multi buy deals encourage us to bulk buy so these drinks are always within reach at home.

And with almost a quarter of children as young as four entering primary school overweight or obese, the dreadful consequences of our diets are all too obvious”.

Professor Bauld added:”While the sugar tax was a step in the right direction there’s much more to be done.”

She seems certain that supermarkets play a key role with their multi pack deal which make easier for kids to consume a greater amount of soft drinks.

Christmas is now upon us, a time known for overconsumption. Over the years adults and children alike have been encouraged to consume a greater amount of food and drink than usual. Often childrens’ stockings are full of junk food.

The justification being simply “It’s Christmas.”

The media doesn’t help discourage this, instead airing adverts that make them more appealing. Especially soft drinks as we in Scotland are familiar with the Snowman Irn Bru advert that airs every year. 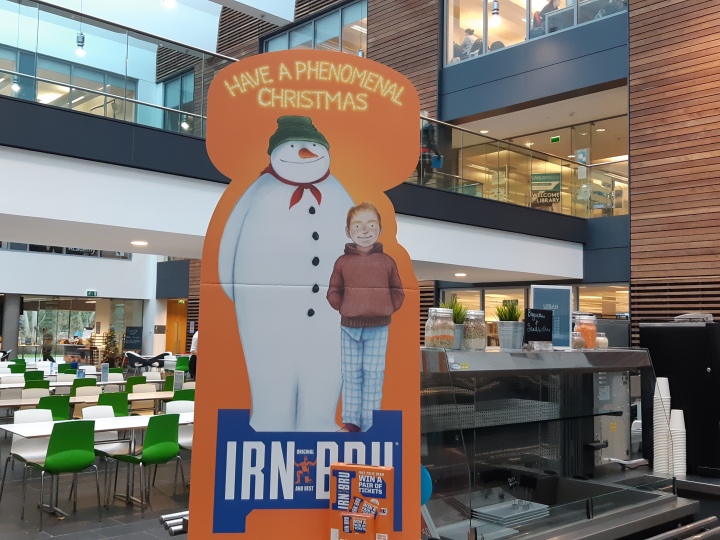 Jonathan Fyfe said:” It’s a time where there’s more social gatherings. If you’re not drinking 9 times out of 10 you’re handed some kind of fizzy drink.”

Cancer Research UK recognises this as their research states that children are twice as likely to ask their parents for junk if they watch more than 3 hours of TV per day.

They also state that obesity in childhood makes you 5 times more likely to have obesity in adulthood which in turns increases the chances of developing cancer later in life. Obesity has been linked to 13 different types of cancer.

Jonathan Fyfe said : “If you can understand and control it when you’re younger then by adulthood you’ve got that education… if you’re watching what you’re consuming from a young age.”