There will be at least two non-Scottish teams in the quarter-finals of the Irn-Bru Cup for the second consecutive year following the draw earlier this afternoon.

Irish side Bohemians have been rewarded for their victory against Peterhead with a home tie against English Conference side Sutton United, whilst Welsh Premier League runners-up Connah’s Quay Nomads will welcome Northern Ireland’s Coleraine to Flintshire.

Elsewhere Motherwell Colts have been handed a home match with Sligo Rovers, and St Mirren’s Colts will also be at home – as they take on former Saints manager Gus MacPherson’s Queen’s Park.

East Fife will fancy their chances of another upset having already disposed of Partick Thistle in the second round, as they take on Championship opponents again in the form of Queen of the South, whilst League Two Edinburgh City take on League One leaders Arbroath at Gayfield.

An all Championship tie between Dunfermline Athletic and Alloa Athletic completed the draw.

Ties are scheduled to take place on the weekend of August 13 and 14. 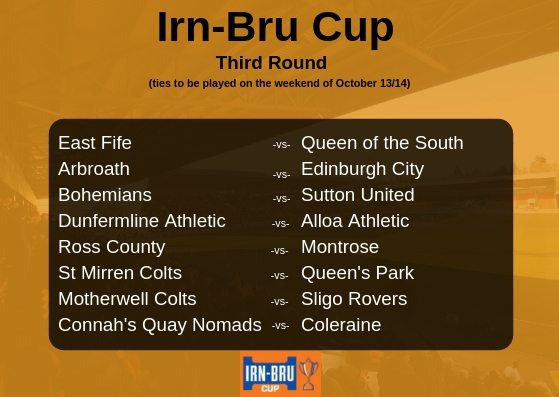