Paisley will go back to the 90s on Saturday as the skies over the town get set to light up to the sounds of music from the era for their annual fireworks extravaganza.

The hugely popular event will take the form of an all day festival beginning at 2pm with arcade games, animation sessions and face painting for kids culminating in the fireworks display above Paisley Abbey at 7pm.

Adding to proceedings will be the return of a silent disco and a much anticipated 2 hour DJ set by capital radio’s Des Clarke and Fat Brestcova from atop the balcony of Paisley’s Town Hall. 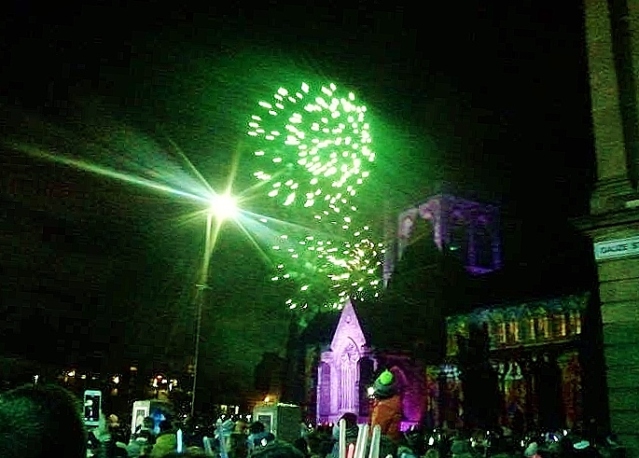 ouisa Mahon, Head of Marketing, Communications and Events at Renfrewshire Council, said: “We are blessed with a stunning skyline for a fireworks display here in Paisley and we are looking forward to seeing thousands turnout to enjoy the spectacular display – including many who will be travelling to the town from outwith Renfrewshire.

“Hosting major events in Renfrewshire is part of a wider plan to use our unique heritage and culture to make us a destination and drive footfall to local businesses and traders.

“Paisley Fireworks Spectacular is a firm favourite in Renfrewshire’s annual events calendar and this year will be even more special with 90s themed fun, live entertainment and a fantastic range of free, family activities in Paisley Town Hall.”

This year’s 90s theme follows last year’s 80s themed success when denizens of Paisley crowded the high street to rock out to the sounds of Queen, Journey and Madness while the skies overhead erupted in a vibrant display of colour and sound.  As excitement builds for the weekend attendees prepare to take part in what has become something of a town tradition in recent years.

The 2017 event took place amid the buzz surrounding the, ultimately unsuccessful, Paisley 2021 bid for U.K city of culture but organisers are expecting the event to prove equally as popular this time around.  Paisley mum, Gillian McPate, said:  “The fireworks were fantastic last year and we can’t wait for this one.  It’s such a great day for the whole family.”  Thousands are expected to attend as services hear up for one of their busiest nights of the year.

Miss McPate said: “They shut the roads and the streets are jam packed but no-one seems to mind.  There is a real community feeling surrounding the event that you don’t really get quite the same in other towns I don’t think.  The whole area seems to come out for it.  They had a huge Halloween festival last weekend as well and that was really well attended.  Paisley just comes alive at this time of year.”

Renfrewshire council refused to be drawn on the increasing public debate over the private sale of fireworks but a spokesperson for the council stated: “We would encourage everyone to come along to the event on Saturday and urge people to take the advice of our colleagues at Police Scotland and Scottish Fire and Rescue Service by attending organised fireworks events for their own safety and enjoyment.”

The Guy Fawkes event runs all day from 2pm on Saturday the 3rd of November with the display itself projected to conclude around 8:30pm.