A bride to be was left in tears following the cancellation of the three day racing event last weekend after it was revealed that one of the main tracks was waterlogged. 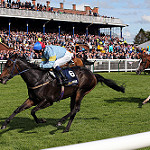 Stacey Bradley had her hen party booked for Friday’s race and was disappointed when she heard the news it had been cancelled. The 32 year old first heard of the cancellation of the event through a Facebook post and contacted them herself to enquire further. Ms Bradley explained, “I just cried. We asked Ayr if the event was still happening without the horses but we were told no due to something to do with their license. At that point I realised then I had to look for somewhere else everyone could go to.”

Last Thursday would have been the start of the weekends events. An inspection of the course was meant to take place at 8am on Friday morning according to the Ayr Racecourse official Facebook page, in hopes that the popular Ladies Day event could continue. The weather conditions, however, did not improve making the track unsafe for the races to take place.

The Paisley bride had 36 guests joining her in her celebrations. They had already paid £95 each for the event. She attempted to get an immediate refund but the racecourse were only able to reimburse customers by the method which they paid and payment was delayed until yesterday as it was transferred through the bank. Fortunately the hen party were able to make the most of their day and enjoyed it regardless of its stressful start.

Stacey, though disappointed felt that there was not much more the racecourse could have done to resolve the situation, considering the circumstances, she told UWS Newsroom; “From my experience, I don’t honestly think there was anything more they could have done. When it was just a Facebook post I was getting quite angry assuming we were to get a phone call but we eventually were phoned. I think they done the best they could in a bad situation.”